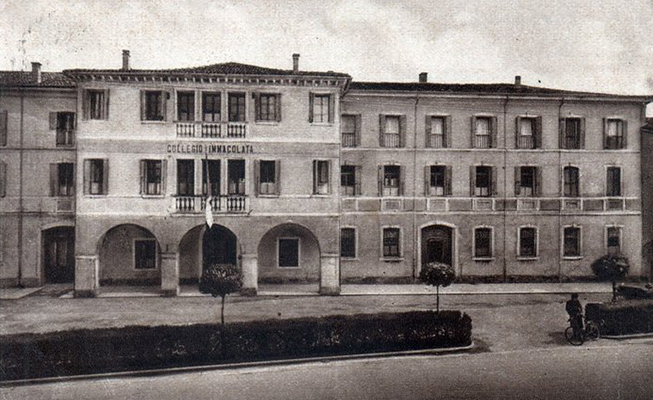 The presence of the Daughters of Mary Help of Christians (Salesians of Don Bosco) in Conegliano Veneto has distant roots, deeply linked to the area and the hearts of the people.

Since the beginning the ‘FMA’ sisters have been active protagonists of the culture and education of the territory, through the tireless networking and synergy with which they have built authentic relationships over time, able to help families and young people of the area.

“When God wants to carry out his projects for the benefit of the young, he invokes men and women with a strong educational passion and accompanies them on their arduous journey. This was a case of Collegio Immacolata of Conegliano.”

It was the suggestion of a young catechist from Conegliano to a parish priest of San Rocco to allow the presence of the Daughters of Mary Help of Christians in the town.

On 10 November 1897 the first 6 FMA arrived to Conegliano, led by the young leader Sister Clelia Genghini. Since then, a ‘construction site’ was opened, still in continuous evolution, with the intention of creating an environment rich in values, capable of educating and arousing a sense of responsibility in the young people to whom Don Bosco repeated:

“You are the unique and continuous thought of my life!”

The first educational institution to open its doors was the Festive Oratory – Youth Centre, followed by the Primary School, which was recognised in 1963.

On the strictly educational side for young lay people and committed adults, according to the indications of the Second Vatican Council, the Diocesan School for Catechists was established in 1964 and to offer alternative cultural opportunities to young people, the CGS association was created (Cinecircoli Giovanili Socio Culturali).

The life of the College from the 1970s onwards was characterized by the ever-significant presence of the laity as collaborators in the educational work. First of all in the PGS Associations (Polisportive Giovanili Salesiane, 1973), TGS (Salesian Youth Tourism, 1984) and in the training of free time entertainers (1987).

In 2001-2002 school year all the schools became officially recognised, a great achievement due to collaboration of the laity, and of the whole teaching staff engaged in the constant improvement of educational / regional projects.

Currently at the entrance n. 24 of Collegio Immacolata are the Oratory – Youth Center, the After-School Club, the ADS training groups (Domenico Savio’s Friends) and the GR.EST (Summer Camp ).

Since 1897, leader in education in Conegliano

Discover who we are  |  Visit us